Today was our “city tour” of Cape Town, which was either a half day or full day tour depending on which document you believed. The truth was we got picked up at 9:30, deposited for lunch at 1:00, and our guide hung around until we finished around 2:45 to take us back to the hotel.

In between we saw the sights of the city. Not terribly exciting, but interesting. And you learn a bit every day. For instance, we learned that South Africa has two capitals, Pretoria (the administrative seat) and Cape Town (the legislative seat). The President’s residence, a White House, is located here.

We learned that there is a colorful Muslim section that has been intact for a couple of hundred years. The Muslim community, people whose ancestry was Indonesia and Malaysia, were brought to South Africa starting in the mid-17th century as slaves by the Dutch settlers. Slavery was ultimately abolished in the first half of the 19th century, before our Civil War. This group is known as “colored”, a term used to describe people who are neither white (of European decent) or black (of African decent). Under apartheid, colored people had a higher standing than blacks, but were still subject to oppressive rule.

The cannoneir and his cannon, August 2017

We learned that a canon has been fired every day at noon for hundreds of years as a navigation aid to sailors off the Cape, and heard it fired. It is loud. In fact, I never got the picture I was trying to take of the actual shot – smoke and recoil etc. – because the noise knocked my finger off the shutter button. 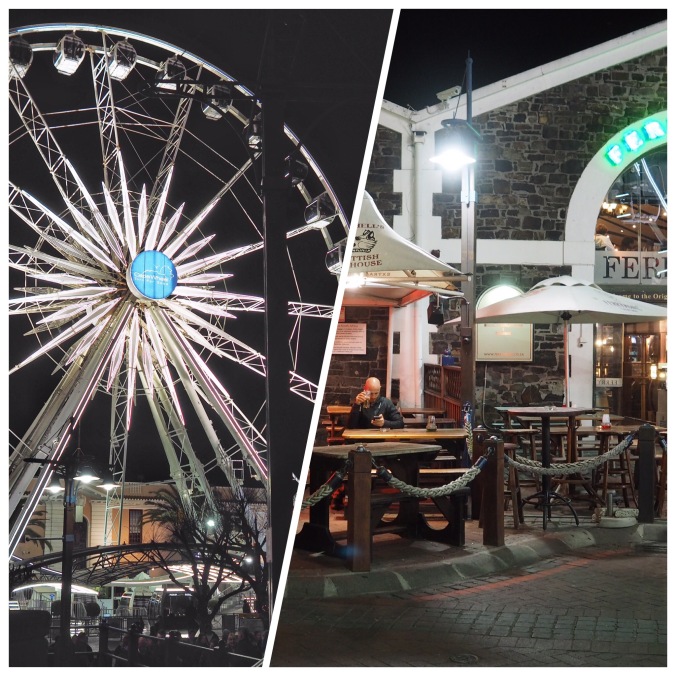 The Cape Wheel and Ferrymans Tavern at night, August 2017

We learned that, contrary to common wisdom in our country and what we had been told, there are areas in South Africa and specifically in and around Cape Town where it’s perfectly safe to walk around by yourself. Sally and I had long conversations about this before we left, mostly around how much, if any, jewelry she should wear, and whether I should wear a good watch or a Timex. We compromised on good watches, wedding bands and nothing else. But the Victoria & Alfred Harborside area is full of shops, shoppers, restaurants, a big Ferris wheel, and lots of people walking around. In fact, there is a huge shopping mall which has jewelry stores, proving the point that people here wear jewelry.

Security is maintained by private security guards employed by businesses who are both visible everywhere, and in plain clothes as well. I walked over for dinner tonight, and it was perfectly fine. Sally and I had already walked over there from the hotel two nights ago, and we walked back from the mall this afternoon.

Tomorrow will be our last day here, and our guide, Nic, is picking us up to drive down the coast towards the Cape of Good Hope. I don’t think we’ll actually go that far, but we shall see.