Our travel yesterday was far in distance and far in style. We went about 1,300 miles from Cape Town to Jack’s Camp. We also went from state-of-the-art luxury to primitive shabby elegance.

First the trip: Nick picked us up at the hotel at 8:00 am and deposited us at the airport 15 minutes later . Our flight to Maun, Botswana was on time at 10:15. Maun is basically a transit point for safari travelers. Scheduled flights come in from big cities, and small craft go out to the camps. In our case, we somehow got assigned a pilot and plane from a different carrier, and so Johannes flew Sally and me in his single engine plane about 100 miles to Jack’s (4). We were met at the dirt landing strip by Harold, our guide there.

Jack’s is deliberately designed to emulate the safari experience from the early 20th century. You stay in real tents. They have hot and cold water and a flush toilet, but that’s about it. No electricity – light comes from paraffin lanterns or battery powered lamps, both of which are pretty dim. No heat – we found two bush babies (1) under our heavy quilt. No Internet or cell service, of course. Charging is done at the charging station (2) in the meal tent from 8-5 each day.

The overall decorating style is what someone imagined an English safari camp would have looked like 100 years ago. Campaign chairs, wooden toilet contraption, big four-poster canopied bed, etc. 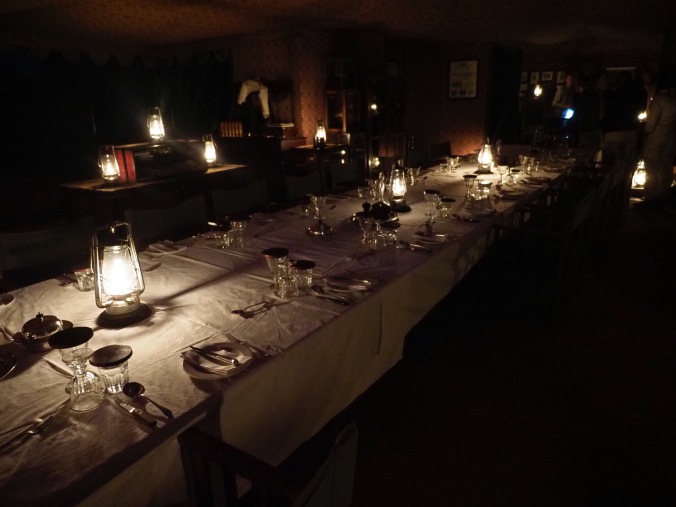 The dinner is eaten family style around a big table, and just like when you feed your family, you get what mamma cooked (3). Sally and I agree that the food is top rated.

The camps in Northern Botswana are much warmer than Singita was. Where Singita was about as far from the equator as Savannah, Jack’s is more like Miami. So it’s pretty warm in the sun during he day. And since we are in the middle of a desert, it rapidly cools down in the evening and at night (hence the bush babies).

Sally heads off on safari, August 2017

We arrived just in time for afternoon tea, so we threw together our safari kit and headed over (7). After tea we went immediately out to look for some brown hyenas; we found one. As this is the desert, one does not come here to see abundant wildlife – and after Singita’s bounty, it was only mildly interesting. Also because this is desert, the dust is pervasive.

As I mentioned, dinner at the big table was tasty. A staff member escorted us to our tent afterwards (5), and then we had to unpack, prepare for the morning and get ready for bed in near darkness. The five paraffin lanterns and four battery lamps along with mini-flashlights just didn’t cut it.

———————–
(1) Hot water bottles. Big ones.
(2) Lots of power strips on a table.
(3) Not necessarily my family, where there seem to be as many food choices as there are people.
(4) Not to criticize since he got us there safely, but he kept a map balanced on one knee and what looked like the plane’s EZ-Operation Guide on the other.
(5) This is the same as Singita – guests are not allowed outside alone after dark.
(6) A staffer came up to our tent and called us; there’s no phone in the tent, of course.

(7) This needed scheduling, as it was a five minute walk.