Imagine you took Niagra Falls and put it down in the middle of the wilderness, hundreds of miles from anything. Just rugged mountains upstream, with no industry to encourage any commerce and therefore shipping on the river. Hundreds of miles of scrub brush downstream, with rocky and dry land unsuitable for crops.

Then you built a large Victorian style hotel by the Falls, and a railroad to deliver tourists. A small town would grow up around the hotel to support the workers and provide some services to visitors – restaurant, gift shops, art galleries, cheaper hotels and campgrounds.

You would have Victoria Falls.

David Livingstone, the famous English explorer and missionary, was the first European to see the Falls. The Zambeze River, which forms the Falls, is also the local border between Zimbabwe, where we stayed, and Zambia. The town of Livingstone is a few miles away in Zambia.

Everything you need to know about Victoria Falls, August 2017

After six nights on safari in Botswana, Vic Falls (1) was a good decompression point before our long journey home. While the hotel is large and fairly luxurious, it does show it’s age somewhat, and the service is not as crisp or attentive as the other places we’ve stayed on this trip.  Even the Cape Grace Hotel in CT (2) had much better service than this.

As far as I can tell, there are four things you can do in Vic Falls. 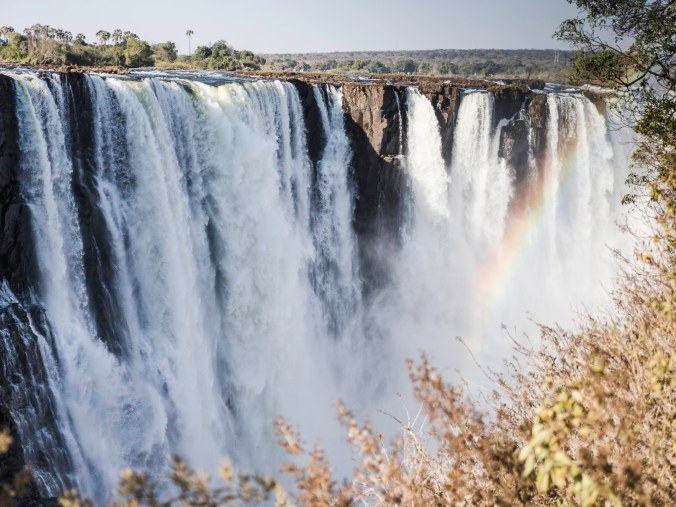 The Falls stretch for over a mile wide and about 250-350′ high.  It’s impossible to see the entire width of the Falls from any vantage point on the ground; that is only possible from the air.  We were wisked over to the Falls, which is surrounded by a National Park, by our guide as soon as we arrived at the hotel around 3:30 in the afternoon.  This is actually the best time to visit, as the late afternoon sun is behind you and you get rainbows in the mist rising from the water.  The falls themselves are mostly in Zambia, but the best viewing points are on the Zimbwabwe side of the river.

When we visited the US National Parks several years ago, we were impressed  by the apparent stupidity of people who felt they were invincible, and that the parks were just as safe as Disneyland.  That behavior is not limited to the US; we saw people bathing in pools a few feet from the edge of the waterfall.  Craaaaazy.  Or Darwinian …

Not likely to pass on their DNA, August 2017

Just downstream of the Falls the Victoria Falls Bridge spans the gorge for 650′, and about 420′ above the river.  It was comissioned by Cecil Rhodes, the British mining magnate who gave his name to Rhodesia (the predecessor to Zimbwabwe and Zambia), the Rhodes Scholarship, and was a founder of the De Beers diamond firm.  He was also an unabashed white supremacist.

The next day we hung around the hotel, and went for a walk into town where we found a large market place that seemed to specialize in large stone and wood sculptures. Despite the tempations, we managed to not buy anything.

At 3:30 we went on our last activity, a sunset cruise on the Zambeze River complete with snacks and unlimited drinks.  Our last African sunset …

(1) Just like Joburg is local slang for Johannesburg, Vic Falls is how Victoria Falls is referred to around here.