Today was our day to visit some very touristy attractions in the suburbs.

Vancouver is on the water, of course, and the shield formed by Vancouver Island provides for excellent boating and water sports. But if you go in the other direction, you find forests and mountains. In fact, you find a rain forest, which is what the British Columbia coastal area is. As for mountains, Whistler Blackcomb Ski Resort is only 75 miles from Vancouver. And it’s huge: over 5,000′ of elevation, 450″ of snow each year.

But we didn’t venture quite that far.

About 30 minutes from Downtown is Grouse Mountain, a much more modest 1,600′ elevation and maybe 20 trails. They have a gondola which operates in the off-season and have a number of activities on the mountain. Nearby is the Capilano Suspension Bridge, a pedestrian bridge which runs a couple of hundred feet above a river gorge.

We hit Capilano first. It’s really a private park, with the main bridge leading to an area covered with fir forests and having a number of wooden walks which you access by crossing the 450′ suspension bridge. There’s also a “canopy walk”, a series of smaller bridges about 100′ above the forest floor.

This being a beautiful Sunday, and so close to Vancouver, Capilano was already crowded when we arrived around 10:30 (it got much worse later in the day). After a short wait, we started across the suspension bridge. Sally had been concerned about the bridge. As a suspension bridge, it is quite wobbly as you cross it, and both ends get a bit steep as you walk down onto the bridge and then up. So she tried it, and then turned back.

I continued, and spent about 30 minutes going on the Treetops Adventure, as they call the walk high up. I walked around a bit at ground level before making my way back across the bridge. As you can see from the pictures, it was anything but a quiet commune with nature. The crowds were just short of too much, and as I said, the lines were longer when we left than when we arrived. 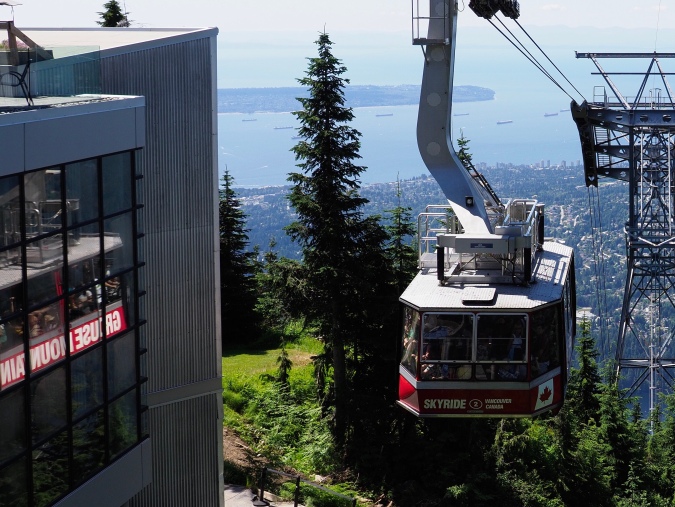 From there we took a public bus to Grouse Mountain and rode the gondola up. Again, the crowds were not quite at the level of a problem yet. We got on the first gondola after we got to the line, although it was pretty full. At the top we walked around for a while then I had lunch in the summit lodge. Sally bought a muffin, and we sat on the deck and enjoyed the weather and views.

It’s hard to see in the pictures because of the haze, but Vancouver Island is visible in the distance. According to the signboard, visibility was 50 miles today.

After an unfortunate incident back at the hotel with our room not being made up yet, we had a pleasant dinner at Joe Forte’s, a seafood and chop house a few blocks away. Joe Forte was not a famous politician, nor the name of the founder of the restaurant. Rather, he was a city lifeguard renowned for teaching hundreds of children to swim in the early 20th century. Why someone decided naming a restaurant after him made sense, I don’t know. The place is large, noisy and has a piano player who loves pop from the sixties and apparently gets paid by the note. It also has a garlic-laced menu. A fillet mignon pre-seasoned with garlic? Really?