(Note: this should have been posted yesterday, but I got distracted.)

Today we screwed up our courage and went back to Gastown, which you’ll recall we were unable to find on Friday. It seems we were a couple of blocks off and were in the middle of the skid row, which gives a distinctly different experience than we were expecting. This time we decided to take no chances: we took a taxi to the Steam Clock at the heart of Gastown. Seven minutes later we were there. 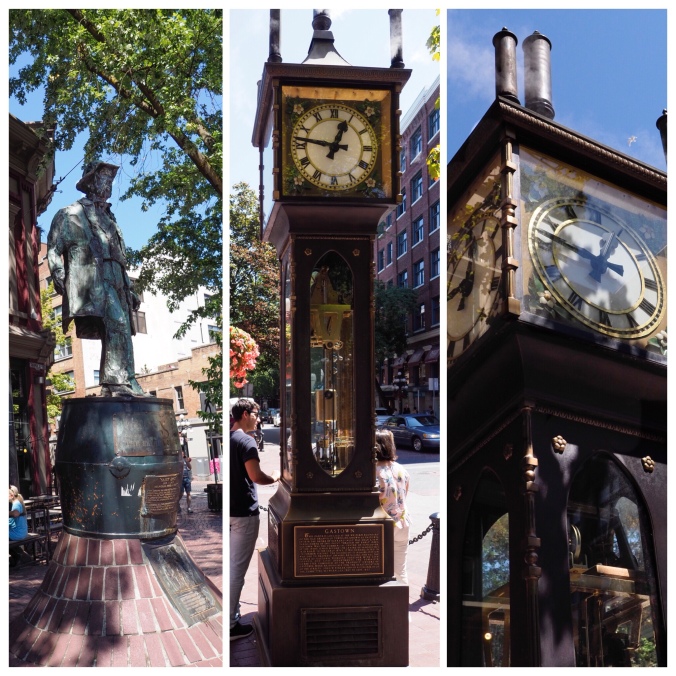 Gastown allegedly got its name from a character named Gassy Jack, so called because he liked to talk a lot, hence “gassy”. He was an Englishman who owned a bar or two in the area for a few years, but also lived in many other places in BC and California during his 44 year life. He worked as a merchant seaman, and failed as a miner. Anyway, there’s a statue, so the story must be true.

The core of Gastown is a few blocks along Water Street filled with bars, restaurants, clothing and decorating stores, gift shops, galleries, etc. The area was once the core of Granville, which grew and was renamed Vancouver in 1887 as the Canadian Pacific Railway was being built. The surrounding blocks are a bit more residential, and also quite trendy.

The overwhelming majority of the people we saw in Gastown were either shop workers or tourists, many of them from the giant cruise ships which inhabit Vancouver all season. As with our day yesterday, the crowds were just short of “too much”. We had no trouble walking on the sidewalk, nor getting a table for lunch.

Since we’re way past the souvenir stage, our shopping is generally very casual and we rarely actually buy anything. But it was pleasant today, and we enjoyed the area. 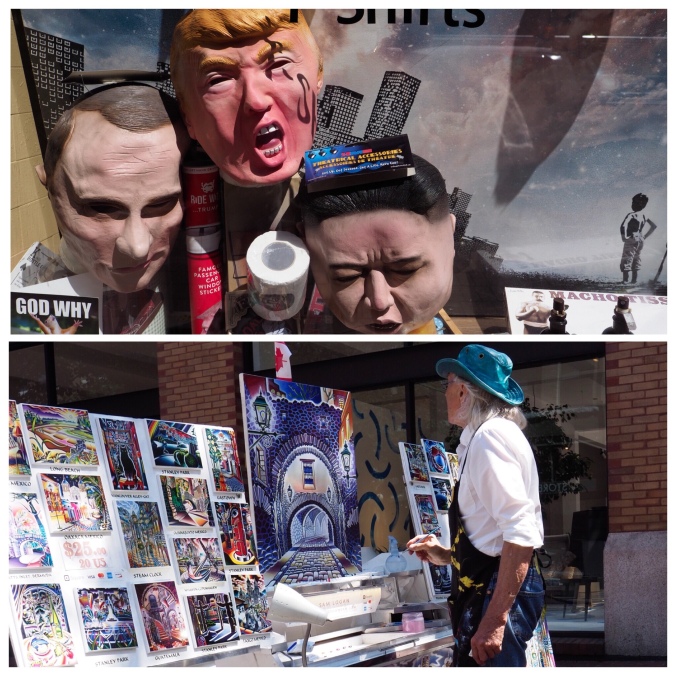 After walking home, we rested for a while then went across the street to the Vancouver Art Gallery. They had a number of exhibits on their four floors of gallery space, much of which was terrible. I’d say the worst piece was a video of the (female) artist and a man taking turns washing each other. I’m not embarrassed to say I don’t get it, because I’m highly confident there’s nothing there to “get”. But there were also paintings by one of BC’s most famous artists, and another set by an artist from Ontario. These were mixed at best, with some interesting pieces, but a lot of stuff I wouldn’t hang in my house.