We left Memphsis, Home of the Blues, and headed on up to Nashville, the center of that music juggernaut known as Country Music. This ride was much shorter than the six hour trek down to Memphis: an easy three hours.

We’re staying here at the Hermitage, the old-school fancy hotel downtown. The first thing we noticed when we walked into the room was the Tennessee state capital outside the window.

The room itself was lovely, as it was hand-picked by Sally. While the style was similar to that of the Peabody in Memphis, this was superior in every way: size, fit & finish, view, and of course price. 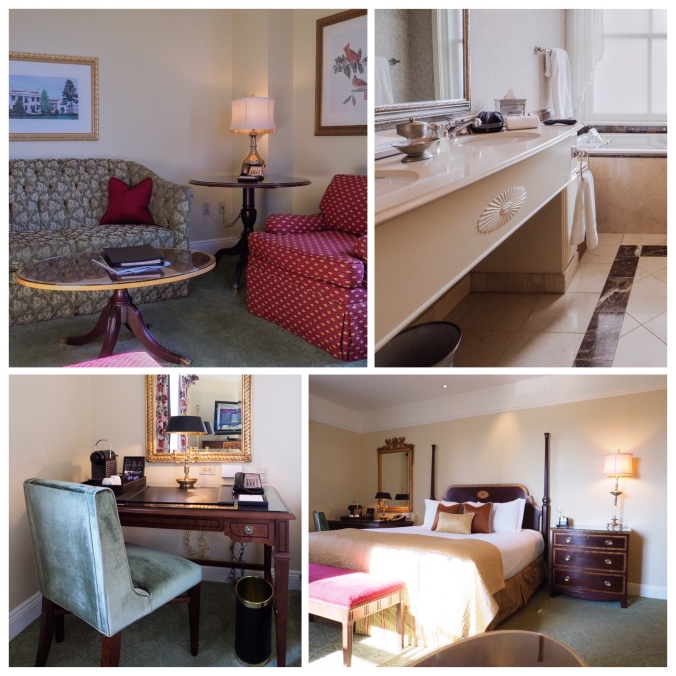 After another exhausting but finally satisfying dinner trying to find some food that didn’t contain forbidden substances, we walked over to Broadway to find some music. The contrast with Beale Street was immediate and huge.

The bluesmen (1) on Beale Street appeared to me to be playing for tips and fun, with no expectation of making a career or living from it. In fact, most of them appeared to be fairly well along in years, past the time when they’re thinking about any career at all. In contrast, what we saw this evening were much younger musicians, with a high caliber of musicianship, and either working as musicians or trying to make a career (2).

In Nashville the musicians we saw today were all white. The audiences were all white and ranged from youngsters who needed to show ID to a small number of older folks. While some were no doubt tourists like us, most appeared to be relatively local folks in town to party. And both the street and the bars we walked past were all very crowded, although we only made it one block before we settled into Dierks Bentley’s Wiskey Row.

The band was quite good (and loud), and they were playing what passes today for country music. Here’s part of the setlist we heard (4):

We liked all the music. And they sang it with southern accents, and put in a few country licks. But the definition of country has been stretched beyond recognition.

(2) Women were also much more represented, although still a minority of the performers.

(4) There were a couple of songs I didn’t recognize, which I assume were “country” hits.