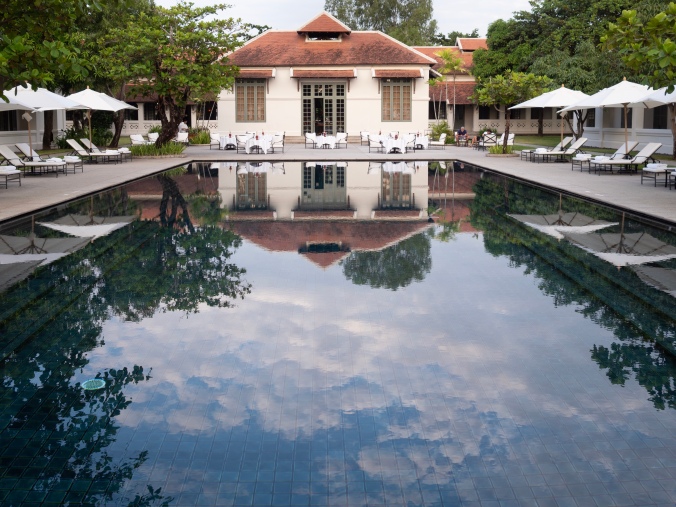 Breakfast room at the Amantaka, November 2019

So I’m beginning to develop a sense of how this vacation is going to look. After breakfast Wednesday morning our guide, Oudone, met us at 8:30 for a “Temples of Luang Prabang” tour. Luang Prabang is much smaller than Chiang Mai, and also much poorer, so there are fewer temples of note.

But the drill is the same: out of the van (1), walk around the grounds a bit, guide buys tickets, shoes off, wonder at the Buddha, shoes on, off to the next stop. The temples are nice, and the statuary and decorative arts are often beautiful, but it’s kind of like the 58th church you’ve seen while touring Italy. 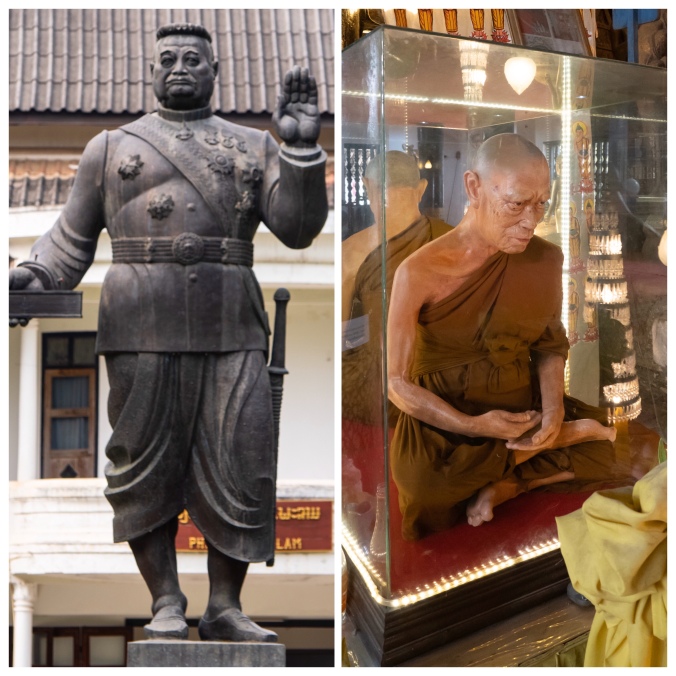 We also saw the former Presidential palace. Before the communist Pathet Lao took over the country in 1975, two successive Kings lived in this large building, which is quite simple by Western standards. We had to do the shoes-off thing here as well, even though it is neither a temple nor a home (it’s now a museum). There are lots of era-appropriate artifacts in the palace, per our guide, but I’m skeptical that they were originally from there (2).

Another activity that was part of this tour was climbing a hill to a temple at the summit. But it was pretty warm, and the climb was more than 300 steps, so we decided to bail. I could do it any time on my own, anyway.

Around 11:00 Oudone asked if we wanted to see more temples, and we declined. So the four hour tour was over in 2 1/2. The way I look at it, we already paid, and we would be happier back in our room house than taking our shoes off and on again.

Lunch at the Amantaka: inside or out?, December 2019

We decided that we would try lunch at the hotel, giving them another chance, and then go out for dinner. Since we had so much fun at the Thai cooking class a couple of days ago, we had Lao-style food for lunch and booked a reservation at a Lao restaurant (3) for dinner. Turns out that this restaurant, Tamarind, also runs cooking classes. One of the people serving us had a name tag saying “Trainee”.

The Amantaka has a pair of luxury tuk tuks, so they drove us over to the restaurant, probably saving us $3. The restaurant manger was very attentive; the hotel had given him the garlic speech and he spent a lot of time working with us on ensuring our selections were safe. Which they were.

Preparing for the night market. November 2019

After dinner we walked over to the night market. It’s obviously much smaller than the ones in Chiang Mai or Bangkok, stretching over 4-6 long blocks. From there is was a 10 minute walk back to the hotel.

(2) No pictures were allowed inside the palace.

(3) There is plenty of Western-style food in town, but I suspect it is as tasty as what the hotel served us.