After yesterday’s sidecar tour and lengthy lunch, we deliberately planned nothing for today. We’ve been on the road for 18 days already, and sightseeing and hitting schedules needed a pause. So we slept in (relatively speaking), lounged around our spacious room apartment, and had a late breakfast. Which led to a late lunch.

Not quite a house, but an apartment, November 2019

Some of you may know that massages and massage parlors are very prevelant in Southeast Asia, far more than in the US or Europe. They’re also pretty inexpensive, again compared to the West. And it doesn’t get any cheaper than free: Sally’s had five massages so far, and I’ve had four (1). And all we’ve paid are the tips. Which probably totaled less than $50 for both of us, and we were generous (2).

Today, for instance, we each had a 30 minute foot and leg massage that was an amenity associated with how we booked our room. We both really enjoyed them (3), and both dozed off during the session. The two cost VND 1,260,000, or about $54. If you’ve ever checked out the pricing for massages in fancy hotels or resorts, you’ll know that is dirt cheap.

And just as the price at your local Massage Envy is much better than that at the Four Seasons Hotel, the price for a massage at a small place on the street is better than the Xuan Spa. You could pay as little as $10 or $12 for a 60 minute massage. Of course, the environment is unlikely to compare, and I can’t speak to the quality of the masseuse, but still. 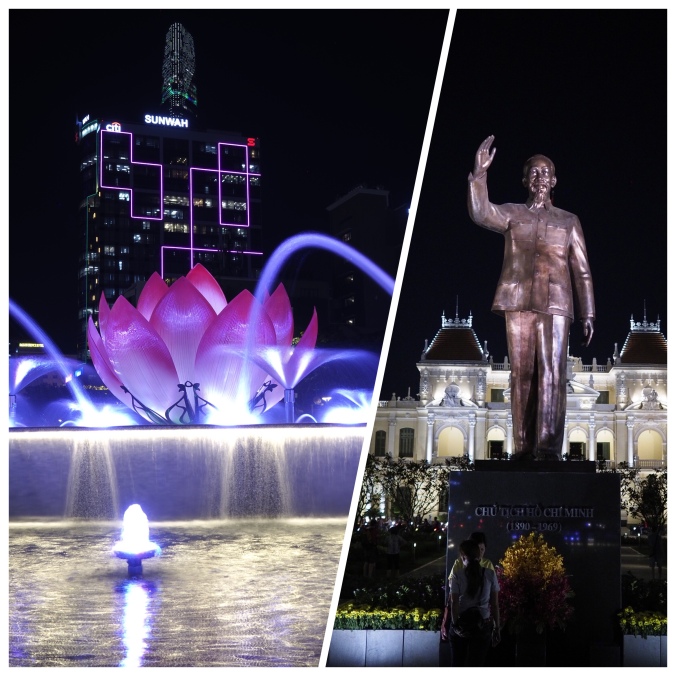 Given our late lunch, Sally wasn’t up for dinner and just had some of the fruit in the room. Rather than try and get a recommendation from the concierge (who seemed to have a limited set of recommendations anyway), I went out and wandered around. I found a large concourse, sort of like a park only completely paved,

Dinner was at a restaurant on the concourse that served western food. And G&T seems universally available.

(3) In contrast to the disastrous massage session on the Ginger.