We had two or three objectives for today: See Biltmore, walk around Asheville, and have a decent dinner. We accomplished all three, though not without a bit of juggling.

(A portion of) Biltmore Estate, September 2018

Biltmore is the massive estate of George Vanderbilt, grandson of the Commodore who built and made a fortune from the New York Central Railroad (1). The statistics of the place are staggering: 250 rooms, 180,000 square feet, 7,000 acres, … . One can go on and on. George built it starting in 1895 as a summer place to escape the heat of the city. It is still owned by his descendents, the Cecils. Between the Great Depression and increased taxes, his heirs were forced to open it to the public starting in 1930.

Today it is a major tourist attraction, including hotels, restaurants and shops along with the tours. Sally and I both found it interesting and well run (at least the portions we visited and one restaurant as well as crowd management). 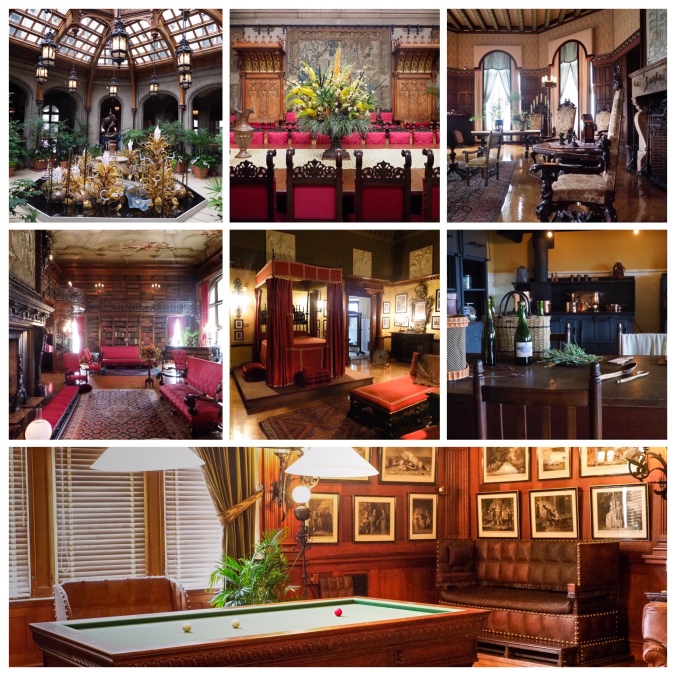 The architecture and decorating is over the top, although not nearly at the level of Hearst Castle. Vanderbilt literally spared no expense in creating the house and furnishing it. Even the servants’ quarters and work areas were spacious and airy.

The 7,000 acres remaining today are a small piece of the 100,000+ acres that were originally part of the estate. In 1914, Vanderbilt’s widow, Edith, completed the sale of 84,000 acres to the Federal government to form the nucleus of Pisgah National Forest. The grounds that remain today were landscaped by Frederick Law Olmsted (2), and consist of formal gardens and a larger park area. There is a Chihuly exhibit in the gardens area – this guy is everywhere we go.

A bit of Broadway in Asheville, September 2018

We were hungry by the time we finished the house and gardens, so we went into the nicer restaurant in the old stable building. I wasn’t expecting much, just high prices, mediocre food and lots of garlic. But the prices were reasonable ($13.95 for a roast chicken dinner), the food was fresh and tasty, and Sally had several choices free of poison. And like the rest of our experience at Biltmore, it was efficient and friendly.

We drove back into downtown Asheville (after a 20 minute drive just getting out of the estate) and walked around a bit. But the weather was gloomy with periodic drizzles, so we went back to the Inn. I made an executive decision not to fight another restaurant battle (i.e. calling around to try and find a garlic-free option) but went to the Whole Foods, bought some wine and prepared food, and we ate safely in our room.

(1) There’s a statue of the Commodore on the south face of Grand Central Terminal looking down Park Ave South.