Our fourth day on the BRP was our biggest mileage day, and our shortest time day. The mountains in northern Virginia were lower, the valleys on either side of the Parkway extended further, atmospheric haze made the distant scenery less interesting, and we were Scenic Overlook’d out.

The day started as they all have, leaving the hotel in Roanoke to hook up with the Parkway a few miles away. The weather finally turned nice, with mostly sunny skies and warm temperatures. So we drove with the sunroof open and the A/C off all day. We were surprised by the lack of traffic, especially today, but actually all four days. We had heard horror stories of long backups and congestion, combined with 20 to 45 mph speed limits. We found little to no traffic, and the speed limit was 45 for most of the trip. In fact, we stopped for a roadside lunch (2) and not a single car passed us in the ~20 minutes we were there.

Sharp Top in the Peaks of Otter, October 2018

We stopped in the Peaks of Otter region and took a walk around a small lake. Turns out there are no Peaks named Otter; it’s just a regional designation.

The beginning and our end, October 2018

After that, we pretty much drove straight through to the north end of the Parkway, which is actually designated the beginning. We passed about 380 mileposts along the way – actual stone posts in the ground with numbers on them – so I was anxious to see MP 0. Sadly, it was not to be found.

The Clifton (1) is a charming property which I understand changed owners and was renovated in the last year or so. Our suite is the Carraige House, which presumably was a carriage house at some point in the past. While the multi-level layout looks cute, it’s highly impractical. The loft ceiling angles in so sharply that I need to be careful getting out of bed, and the bathroom down a narrow flight of stairs makes those nightime visits risky. The top step is unusually small, and the next one has a longer than expected riser. 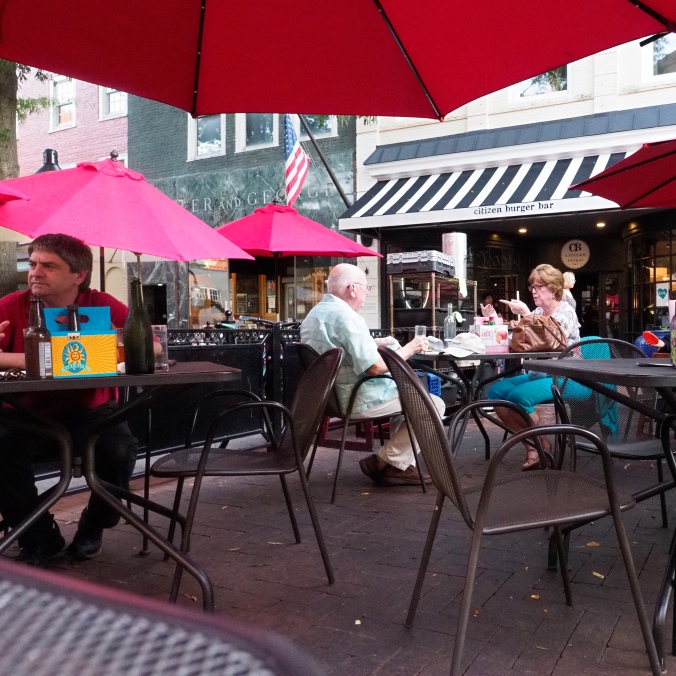 We went into downtown Charlottesville for dinner. They have a several block long pedestrian mall lined with shops and restaurants. We opted for simple, and had burgers and beers.

(2) Sally points out “lunch” is a generous description of the power bars, chips and water we ate.