Our plan for today was to stroll around sunny Santa Fe, looking at art galleries and some of the shops in the Plaza area which forms the major tourist/shopping area. Sally had found out that the colorful furnishings in our hotel – Inn of the Five Graces – were from a local store, so she wanted to take a look there.

We didn’t have the complete story: the hotel was owned by Ira Seret, the founder and owner of Seret & Sons, a renowned furnishings store and supplier which specializes in Central and South Asian goods. Ira, it turns out, was born and raised first in Queens and then Nassau County before spending ten years in Afghanistan, which is where he and his wife started importing goods to the US.

As we had need for a table, we spent some time in their chaotic storage area and Sally wound up tentatively selecting a table. 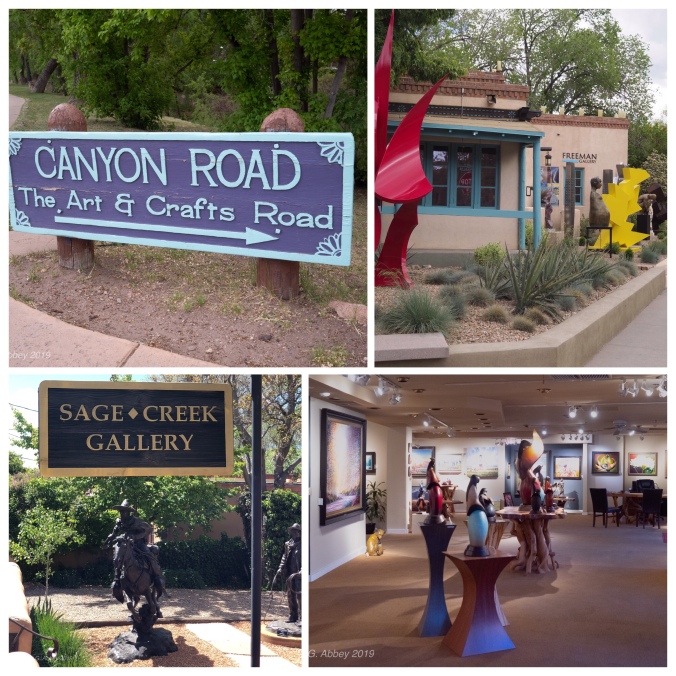 After this success, we walked over to Canyon Road, which is lined with art galleries and restaurants. After stopping for a lunch salad, we came across a gallery that had familiar looking wind sculptures. After looking around and talking to the salesman, we determined that these were the same sculptures we had seen and considered buying seven years ago in Springdale, AZ while visiting Zion National Park. We both liked these sculptures, but couldn’t agree on which one. So it was shelved. 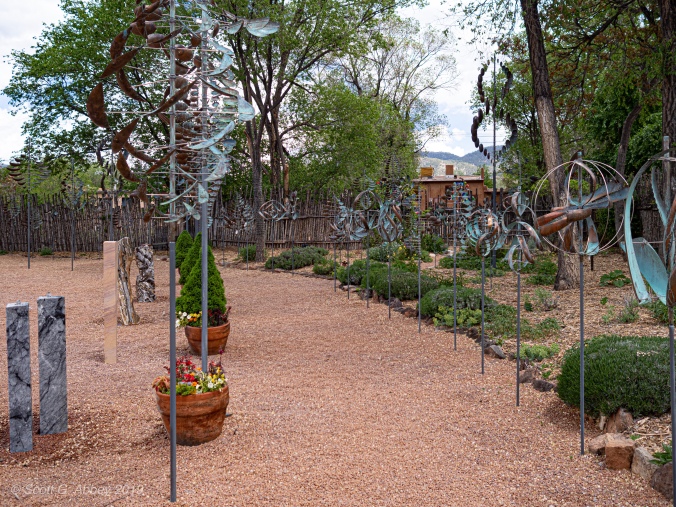 After going around and around and arriving at the same position we each held in 2012, we compromised and agreed to get the sculpture I liked. But I agreed we would get Sally’s favorite if we both were happy with the first one after we installed it at home.

After dinner, I went out for a walk. After all, it’s Saturday night, and I expected downtown to be hopping, with the numerous bars and restaurants doing a booming business and people on the street. Maybe the restaurants were full (1) (2), but the bars I could see into were pretty sparse and the streets were downright deserted.

(1) I say “maybe”, because while I generally couldn’t see into the restaurants, we couldn’t get a reservation anywhere and would up eating in the bar at one. Not that that was a problem, as we had a large booth and the same menu as the restaurant section.

(2) What was a problem is the increased difficulty finding garlic-free dishes that Sally can eat. Our trip to Tennessee last year was exhausting in this regard, and this is turning out the same.