We got here pretty late last night. We were met as usual at the gate by an escort, who was a frenetic guy apparently trying to shepherd a number of people through the international arrivals and luggage process at Hanoi’s airport. The contrast with Luang Prabang couldn’t be greater. Where LP was a sleepy, tiny and run-down (1) airport, Hanoi’s is very large and modern. As befits the capital of a rapidly growing country of 94m people.

You may enter the Socialist Republic of Vietnam, November 2019

I had gotten our Vietnam visas by Internet and mail in October, so we saved a lot of time filling our forms and waiting on lines in the airport.

After getting our luggage and passing through Customs, we were met by Sunny, our guide for the next two days (2), for the 45 minute drive to our hotel. Sunny is energetic and talkative, as befits a guide, but his English accent leaves something to be desired. 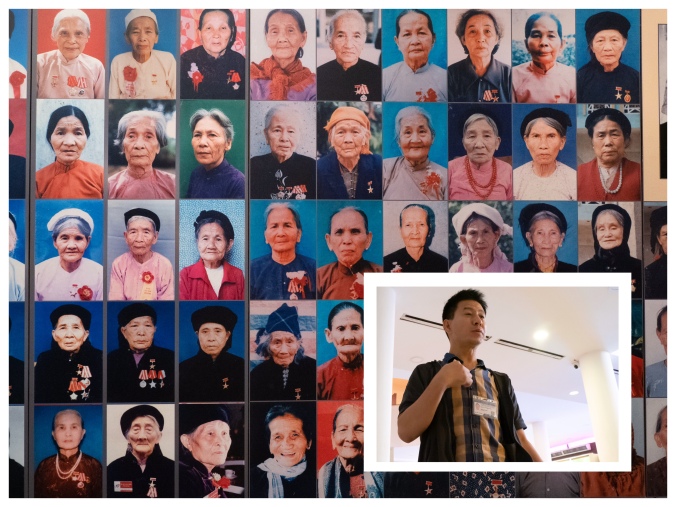 Sunny at the Women’s Museum, November 2019

Sunday morning was the City tour. Sunny and the driver picked us up, and our first stop was the Woman’s Museum. As we walked through the exhibitions of women’s contributions to Vietnam and a lot of regional costumes, Sunny gave us the 30 minute historical talk on Vietnam. I found the museum itself mostly uninteresting, but the history was better.

Bride and her maids, November 2019

Our next stop was some old kings’ palace or other (3), which is now a park/museum. There were tourists looking at the statuary and stuff inside. But the real activity was various groups – wedding parties, high school classes, etc. – posing for formal pictures around the grounds.

After Sunny dropped us back at the Sofitel, we went for lunch in the pool bar – cleverly name “Le Bar” (4).

Sally went up to the room to rest, and, as my custom, I went out for a walk.

Having coffee, or working, November 2019

Like the rest of Southeast Asia, motorbikes are a prevalent form of transportation here. The riders are less constrained by traffic rules, and weave and dart through traffic whenever they can. Crossing the street requires exquisite timing as there are few traffic signals. But it can be done. 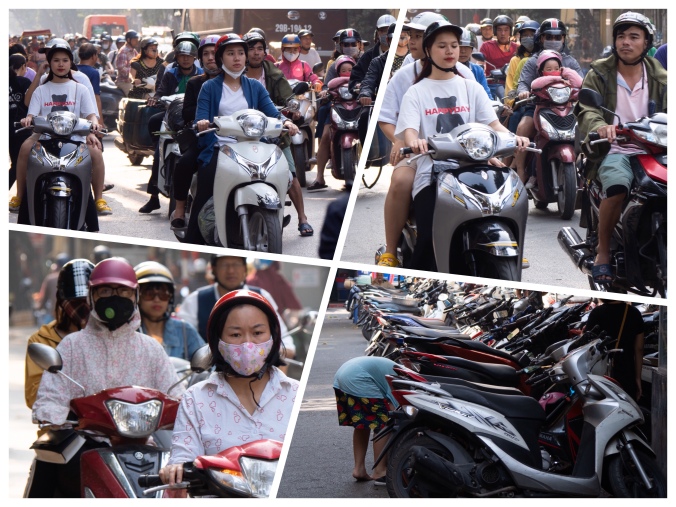 Everyone, from the hotel Majordome to Sunny, said we needed to check out the Sunday activities near Hoan Kiem Lake. The lake is just a few minutes from our hotel, so I went over to check it out.

I have no idea what this parade is about, November 2019

Every Sunday they close the streets surrounding the lake and park starting around noon and going to midnight. It gets busy during the day as families start to arrive, but really takes off in the evening when there are live bands, street food, toy vendors and thousands and thousands of people. 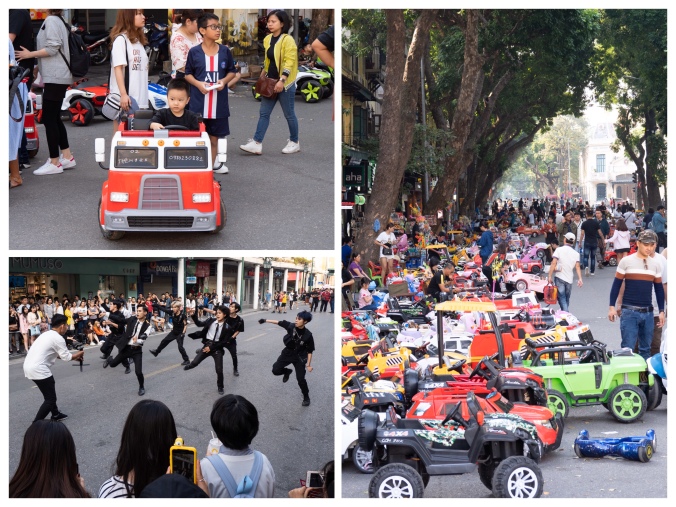 One apparently popular activity is for kids to ride motorized cars around on some of the closed-off streets. We’ve seen many fashion shoots and at least two music videos being made in the streets. 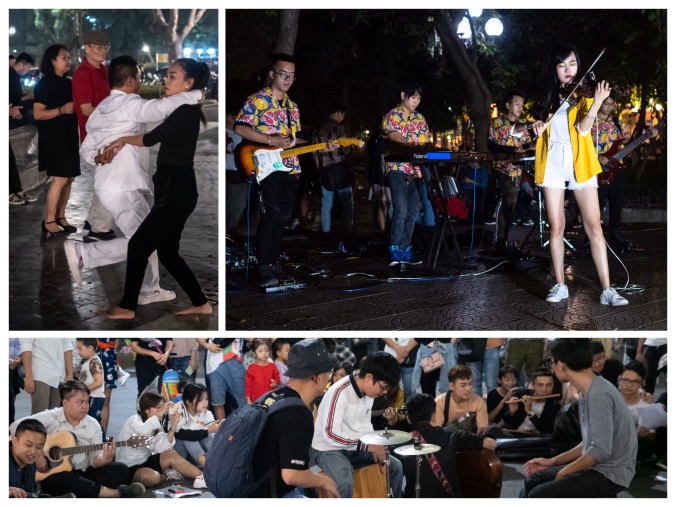 At night, the music come out and it gets even more crowded. One small park was taken over by Latin music dancers.

(1) Run-down, although apparently built in 2015. Given the wear on the seats in the waiting area, they must have bought them used.

(4) The French controlled Vietnam for 100 years, and Ho Chi Min started fighting to get rid of them. But there’s still residual influence.